I Am Not Cool Enough for: Christian Loubontons 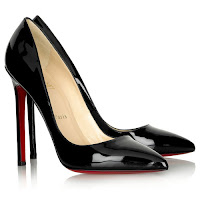 So, at some point, I convinced my husband that if I got promoted, I could celebrate by getting a pair of Christian Louboutin shoes.  In case you aren't familiar with the iconic, red-soled shoes, they are ridiculously expensive shoes, generally 4 inch heels with a 1/2 inch platform with a red sole -- and the red sole is patented by Christian Louboutin.  While there are different styles, I had my eyes on a classic black patent.

Years go by, and my promotion happened!  And then before it could be announced, the company I was working for got acquired.  Which was . . . something.  And after a little more than half a day of dealing with the announcement, my office mate decided the best way to handle the stress was a quick trip to Neiman Marcus to pick up the shoes.  Conveniently, our office was at a high end shopping mall!  So we went!  And I bought the most expensive shoes I own.  And it was incredibly exciting and they were so pretty!

And so I hate wearing them.  I mean, they are gorgeous, they really are, but if I have to say, like walk, or stand in them, or an any way use them as "shoes", I'm miserable.  They are by far the most uncomfortable shoes I've ever worn.  I can wear them for 30 minutes tops.  And then I start thinking, well maybe if I start drinking the pain in my feet will go away.  And then I'm tipsy and wearing 4 + inch heels, and I'm an incredible klutz, so it's a dangerous combination.
By Unknown

Email ThisBlogThis!Share to TwitterShare to FacebookShare to Pinterest
Tags: I Am Not Cool Enough For