Things I Love: Barbies with careers

A long time ago, there was a Barbie doll that said, "Math is hard."  And it was sad.  So, Barbie's people came out with Working Woman Barbie.

I thought WWB was hilarious and immediately purchased her for my desk, being an actual working woman in 1999.  Barb came with a CDROM (which didn't work in Windows NT and so I never got to use), a laptop with several interchangeable screens (line graph, bar graph, random shapes), a briefcase, a grey cell phone, and several files (paper things to hold other papers.)  Barbie was apparently a magazine editor.  Barbie had two really awesome qualities, besides her accessories:

1)  Her skirt could be reversed from day to night.  I'm sure you can flip all of your clothes inside out too for an instant party.  Reverse the skirt, lose the jacket, and Barbie is ready to go dancing with Ken.
2)  A fact which I was sure about because Barbie TALKS!  She has about 15 phrases, half of which were about her date with Ken ("I can't wait to go dancing with Ken tonight!")  The other half were work related, or what Barbie's people think we discuss at work:


And the absolute best:
"Let's go to a meeting!"
which is exactly what I say in the same peppy tone 4-8 times a day!

I discovered Barbie for President 2008 (unbeknown to me, there was also 2004

and perhaps others)  She came in a sparkly business suit and had a pink laptop and pink cell phone.  Sadly, President Barbie 2008 had the SAME cell phone as Working Woman Barbie from 1999 but pink.  Barbie also had seamed panty hose.  It is hard to picture Hilary or Palin dressing like this.  (Barbie also came with a gown for her own inauguration.)  I bought President Barbie and stuck her on my desk next to Working Woman Barbie.

But the Best Barbie Of All is one that I acquired in December -- Barbie I can Be Computer Engineer Barbie doll.  Yes, Barbie is a computer engineer!  Barbie wears pink flats, sparkly leggings and has binary on her t shirt.  She has a pink laptop and finally has upgraded her phone to an iPhone (though the original designs released had her with the SAME phone as my other Barbies.  She now has a Barbie iPhone app as well).  She also has cool pink glasses and a bluetooth headset.  This is, of course, how all of the computer engineers at my office look and dress. 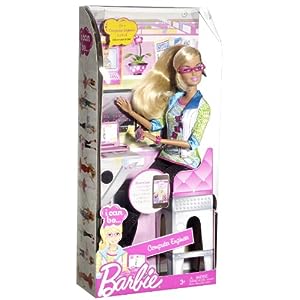 Barbie arrived in a box where she was sitting at a cube.  Clearly a Linux girl, she had a stuffed penguin on her desk and was eating Chinese food out of a container.  She either has an additional monitor or poster that has binary code on it.  (Her shirt also has binary.  Sadly, I haven't tried to decode it).

My Barbies sit on my desk at work, where they get many compliments and comments. 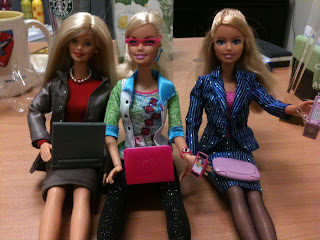 Email ThisBlogThis!Share to TwitterShare to FacebookShare to Pinterest
Tags: things i love